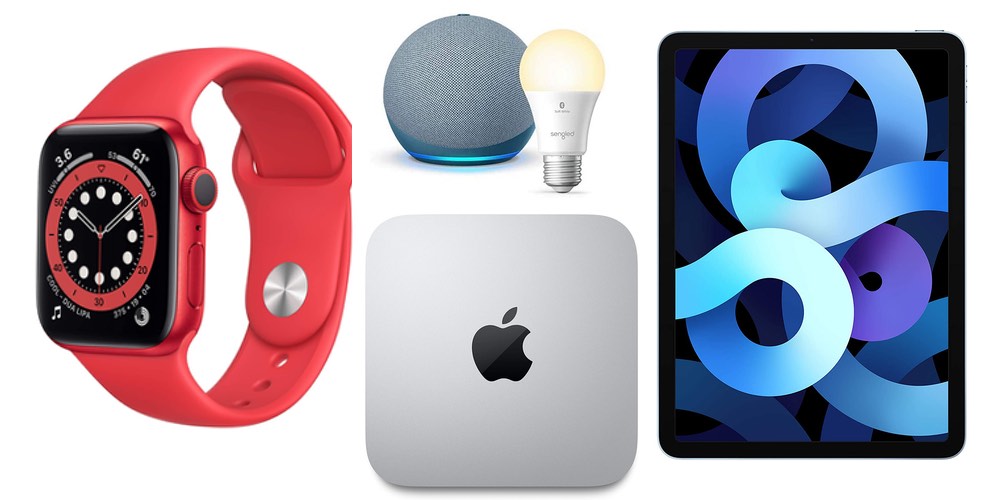 The New Year has begun, and so have the new deals that are currently running on Amazon. You can make the most of your New Year shopping with these new deals. We have got the best ones selected for you right here, featuring tablets, smartwatches, smart home devices, wireless headphones, earbuds, and more.

If you have got an Amazon voucher as the New Year present, then you can just pull that out and get ready to tap into the best deals. Without further ado, let us take you straight to the best deals of 2021!

Grab the latest iPad Air 10.9-inch model on Amazon for as low as $549. This iPad’s regular pricing is $599, which means you are getting a discount of $50 if you buy it right now. Some of the best features on this iPad include Liquid Retina display, A14 Bionic chip with Neural Engine, a 12MP rear camera and a 7MP FaceTime HD front camera.

Get the Apple Mac Mini M1 for as low as $669 on Amazon. This value for money device by Apple houses the powerful M1 chipset. It can support two monitors and features specs like an Advanced cooling system, 8GB of RAM, and a 256GB SSD.

The LG BX-Series 4K OLED TV is now available on Amazon for stellar pricing of $1,396. The deal also has a Deco Gear sounder bundled within the sale pricing. The BX series by LG is a premium smart TV offering with a 4K OLED screen and 120Hz refresh rate.

This smart TV is a delight for watching movies and even playing high-end console games. It comes integrated with the webOS platform and webOS app store for users to install their favorite apps and watch content seamlessly.

The 32-inch TCL 3-Series Roku TV is one of the best New Year deals that you can grab on Amazon right now. The mid-range TV by TCL has a 1080p resolution with a 60Hz refresh rate. It has dual-band WiFi support, 3 HDMI ports, 1 USB port, and more.

It also supports Amazon Alexa or Google Assistant to browse through voice commands. You also get access to up to 500,000 movies and TV episodes via Roku TV.

The Roku Streaming Stick Plus 4K is one of the best streaming devices that you can have for your home entertainment. The device supports 4K streaming, and you also get a remote with it to browse seamlessly through your favorite apps and channels. You are getting the renewed version of the device for $41.

You can now get the Apple Watch SE for as low as $269 on Amazon. The mid-range Apple Watch with a bigger Retina OLED display than the Watch 3. Although a mid-tier version, it has plenty of great features such as fall detection, Emergency SOS calling, and more. It can measure sports like running, walking, yoga, and more.

You can get the Apple Watch 6 with an always-on Retina display, 2.5x brighter to adjust in outdoor lighting. The Apple Watch 6 could be yours for as low as $239 on Amazon right now. It is powered by a U1 Ultra Wideband chip and supports GPS, 5GHz Wi-Fi, blood oxygen tracker, and more.

This is the best deal on Amazon with a heavy discount. You can buy the Garmin Vivoactive 3 GPS for fantastic pricing of $129, which is $120 down from the original pricing of $249.

The smartwatch is a great workout companion as it monitors your fitness level and sports like yoga, running, swimming, and more. It has a built-in GPS and also Garmin Pay for contactless payments.

You can now buy the Apple AirPods for a stellar price of $128 on Amazon. The wireless earbuds’ original pricing is $159, but you can now grab it with a good discount. The AirPods come with a charging case and are powered by Apple’s latest H1 chip.

The Bose SoundSport Wireless are sweat/weather resistant, which makes them the best wireless earbuds while working out. They have a battery life of up to 6 hours on a single charge.

You can now make your home smarter with Amazon’s Alexa-integrated Echo Show 5 smart display with a built-in speaker. The 5.5-inch smart device is great for playing media and holding video calls with your friends and businesses.

Grab the smart device for as low as $44 on Amazon right now, and that’s a significant drop from its original pricing of $89.

You can buy the Amazon Echo Dot smart speaker for as low as $29, which is a drop from its original pricing of $49. The spherical-shaped smart speaker has built-in Alexa support and is currently available on sale and with a free smart bulb.

Well, that brings us to the end of our New Year deals on Amazon. We hope you tap on the best ones and start your new year with new shiny gadgets.