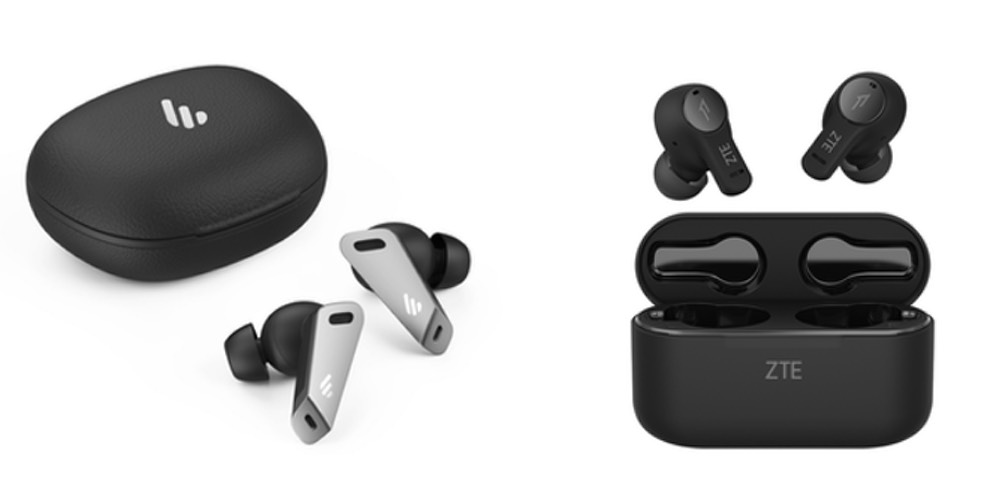 At the CES 2021, OEMs including ZTE, TCL, & Edifier have launched their latest wireless earbuds. TCL seemed to be on a roll as the company announced plenty of products, including earbuds, smartphones, and more. ZTE has also launched a new smartphone alongside the latest earbuds. And audio brand Edifier launched true wireless earbuds. Let’s check out the features and other details about the latest launches.

The TCL Moveaudio S600 is a pair of new true wireless earbuds made for users who want a powerful audio wearable to go by their day-to-day life. TCL has priced them at €149 (~$182) and will launch them in global markets next month.

The Moveaudio S600 features noise canceling that could be of great help to daily commuters. Although these earbuds have noise-cancellation for an immersive audio experience, they do not entirely block the outer interaction to keep the user aware of their surroundings. The Moveaudio S600 true wireless earbuds also have a transparency mode enabling the surrounding noise to penetrate through an audio filter using the microphone. An IP54 rating makes these earbuds water and dust resistant.

Connectivity options on these earbuds include Bluetooth 5 with support Google Fast Pair offering effortless integration with Android devices. The battery on these earbuds provides a backup of up to 8 hours on a single charge. The backup goes up to 32 hours if users keep the buds intact in the charging case for running full charging cycles.

They also have Google Assistant integration that enables seamless playback management. It also has smart wear detection that pauses the playback automatically whenever the users take them off.

The next in line earbuds launch at the CES 2021 is by ZTE. The LiveBuds are the latest true wireless earbuds with support for Bluetooth 5.0, SBC, and AAC. They are touted to offer high-end audio quality. The ZTE LiveBuds are priced at $40.

One thing that one would notice on the LiveBuds is that they have a striking resemblance with the 1More PistonBuds.

The ZTE LiveBuds features an IPX4 rating and touch controls. They come with Android and iOS compatibility with a battery life that lasts up to 4 hours on a single charge and more than 20 hours when left in the charging case to run complete charge cycles.

Users can also control the functioning of LiveBuds with custom taps and long-press gestures. These lightweight earbuds by ZTE weigh just 4 grams each. Similar to the 1More PistonBuds, the LiveBuds also comes with noise reduction technology to block background noises.

The TWS NB2 Pro wireless earbuds have a fantastic design with features like active noise cancellation and ambient sound mode. The noise cancelation enables the active blocking of surrounding noise while the ambient sound mode uses a microphone to augment the surrounding sound. The TWS NB2 Pro is priced at $99 and will be available starting March 2021.

They come with Bluetooth 5.0 support and an IP54 rating for sweat resistance. The company claims that the earbuds offer up to 7 hours of playback with an enabled noise cancellation feature and up to 9 hours without noise cancellation. Users can get up to 23 hours of battery backup if left in the case for full charging. These earbuds also support fast-charging that offers a battery backup of up to 2 hours on a minimum charging of 15-minutes.

On the contrary, the GM5 true wireless earbuds have a striking design that looks quite future-proof. They come with aptX low latency support that prevents audio lag. The GM5 earbuds also have a noise cancellation feature with proximity sensors that automatically pause the music playback when users take them off. The company claims a back up of up to 8-hours on a single charge. The GM5 earbuds are priced at $79 and will be up for sale starting March 2021.