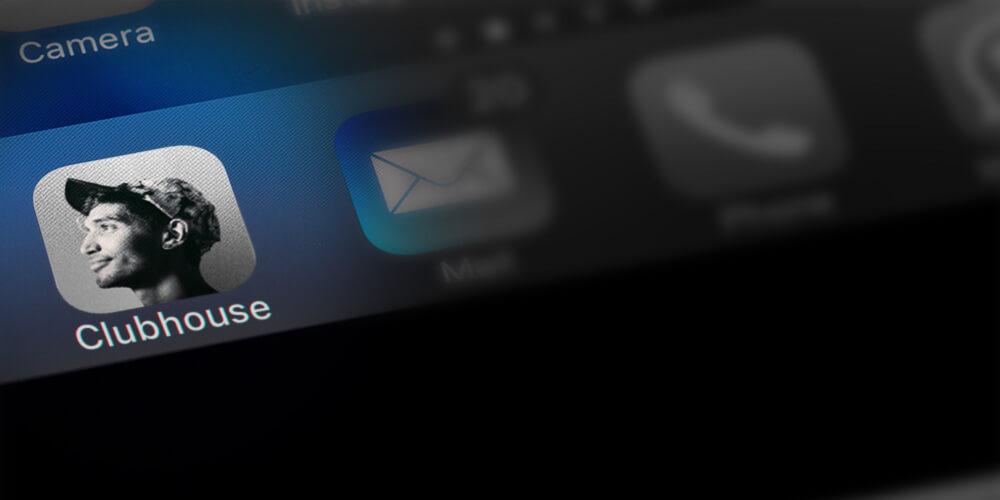 Clubhouse, the app that everyone wants, but only a few are getting, takes an old-school concept and makes it fresh again. It’s invitation-only, and it’s also ripe for the opportunity – but you’d better get there fast.

Today we’ll tell you a little bit about this app. We’ll let you know what it does, who can join, and touch briefly on the possibilities with this old-school medium made modern again.

What is Clubhouse app?

March 2020 marked, among other unforgettable events, the launching of the Clubhouse app for iPhone users. Due to its “selectivity style” of marketing, people had to learn about it by word of mouth. That’s because this app is invitation-only, and this type of marketing certainly gets people’s attention. So, how does it work?

Think about an old-school party line, where you have several people talking audio-only.

You can’t send pictures or video but simply chat with real people in real-time, with only your bio and pic as identification within the Clubhouse network. It’s kind of refreshing. The people that you are listening to might be celebrities, CEOs, or everyday people with a message. The beauty of the Clubhouse app is that it takes an audio-only approach that humanizes the chatting experience again. Users may also find sources to buy followers for Clubhouse to get more audience involvement in their profile.

The feel is something like an interactive podcast, and the potential of this medium is huge. That said, you need to “know someone” to get in on the action. No invite, no Clubhouse for you!

Once you’ve got an invite, you can log in and see some topics that you can listen in on and interact with. You can ‘follow’ users that you like, and the app becomes adept at finding new topics and users that it thinks you might also enjoy. The algorithms are top-notch, and within a few hours, the app seems to know you pretty well.

Rooms can have only a small amount of people present or up to 5000!

There is no recording, so if a topic of your interest makes the “headlines,” you’ll want to be there. Of course, someone will likely start making recordings eventually, but the Clubhouse experience is raw words that you experience in the NOW.

What is Clubhouse app developed for?

Clubhouse was initially developed to provide a ‘virtual meeting room’ of sorts for high-end venture capitalists. The medium caught on, as it were, and others are joining in. It’s gotten enough attention that Alpha Exploration Co., the brains behind this app, was given a 12 million dollar investment by Andreessen Horowitz in just the first two months of its existence.

It was valued at over 100 million, even back when there were only 1500 users. It would seem that there is a lot to be expected from this app in the future.

Joining is done by invitation. Someone you know who is already a member can send you an invite, and you, in turn, can invite two others. While this scheme keeps demand high, it certainly makes it a challenge to get ‘inside’ the Clubhouse. On social media, the Clubhouse app is often discussed, but unless someone sends you an invitation, you can’t simply get the app and join.

Clubhouse app is currently only available to iPhone users, but there are plans to get it out for Android. Paul Davidsson, the CEO of Clubhouse, has advised that an Android app is indeed in the works but has not yet given us a release date.

How to use the Clubhouse app?

Using Clubhouse once you have an invite is a piece of cake. As we’ve mentioned, you can search for rooms based on topics that you would like to hear and discuss, and in this way, you can find a room where you can listen. If you wish to speak, there is a ‘hands up’ icon that may be used, and if the moderator of the room approves it, you will get to have your say.

You can also start your rooms from within Clubhouse, with three options:

1. An ‘open’ room which is available to anyone to attend.

2. ‘Social,’ which allows access to the room to anyone whom you are following.

3. ‘Closed,’ a private chat room where only those you have specifically invited may attend.

The Clubhouse app has been described as being something like a Ted Talk and an audio-only Zoom session if that gives you a little idea of what it is like. No pics, no videos, just audio. Who would have thought that the old ‘party line’ would make such a powerful comeback?

There has been some buzz of late in regards to the app’s security. Part of this is due to a portion of the applications infrastructure being run by a Shanghai-based firm named Agaro Inc. With a portion of the app’s infrastructure going through servers in Shanghai, many conversations could conceivably be ‘tagged’ as taboo and investigated. This is not the only security issue, however, with this young and very beta app.

Researchers from the Stanford Internet Observatory also brought to light an issue with user’s information being unencrypted. This allowed for an as-yet-unidentified user to broadcast a chatroom conversation. Further reports from sites like Bloomberg have advised that some chatrooms audio was being stripped and posted on 3rd party websites.

Clubhouse instituted new security protocols following the chatroom leaks but it remains to be seen if this will be an issue in the future. Despite the “growing pains” which the app is going through, it has still proven to be incredibly popular and well worth a closer look.

Getting the invite is the hard part, but there is some serious potential for Clubhouse monetization once you are in. The options are almost limitless, but just off the tops of our heads, we can give a few examples of how the Clubhouse app may provide some opportunities for serious entrepreneurs:

The medium’s potential is virtually limitless, but you still have to get your foot in the door.

How to get access to Clubhouse in the first place

If you don’t have a friend who can invite you, then the only alternative is to get on the waiting list. While time-consuming, part of the Clubhouse’s marketing strategy seems to be this invite-only system. The Clubhouse has information on the app’s description for entering yourself on the waiting list, and while it is a tedious process, this is currently your only option if you don’t know a member who can get you in.

Of course, this has resulted in a bit of a ‘black market’ growth for invites, with membership invites going for as high as 65 euros each. The Clubhouse is pushing to move to a more open model soon, however, so hopefully, you won’t have to wait long to try it out for yourself.

Some final words on the Clubhouse app

The app seems to be growing rather quickly, and while the conversations are not recorded and stored, there are still many possibilities for monetizing on this app if you move quickly. The first thing that you will want to do, of course, is to get access and if you don’t know someone, get on the waiting list NOW.

While you are waiting, you’ll have plenty of time to flush out your ideas for the types of rooms which you would like to host, and with the app growing in popularity as quickly as it has, we imagine that the waiting list is soon to become a thing of the past. Several celebrity users are already driving the app’s growth directly, with users such as Tiffany Haddish, who was the first to get 1 million followers on the Clubhouse app alone!

The party-line is back with us in the form of an app, and, love it or hate it, there is no denying that everyone wants to get into the Clubhouse!