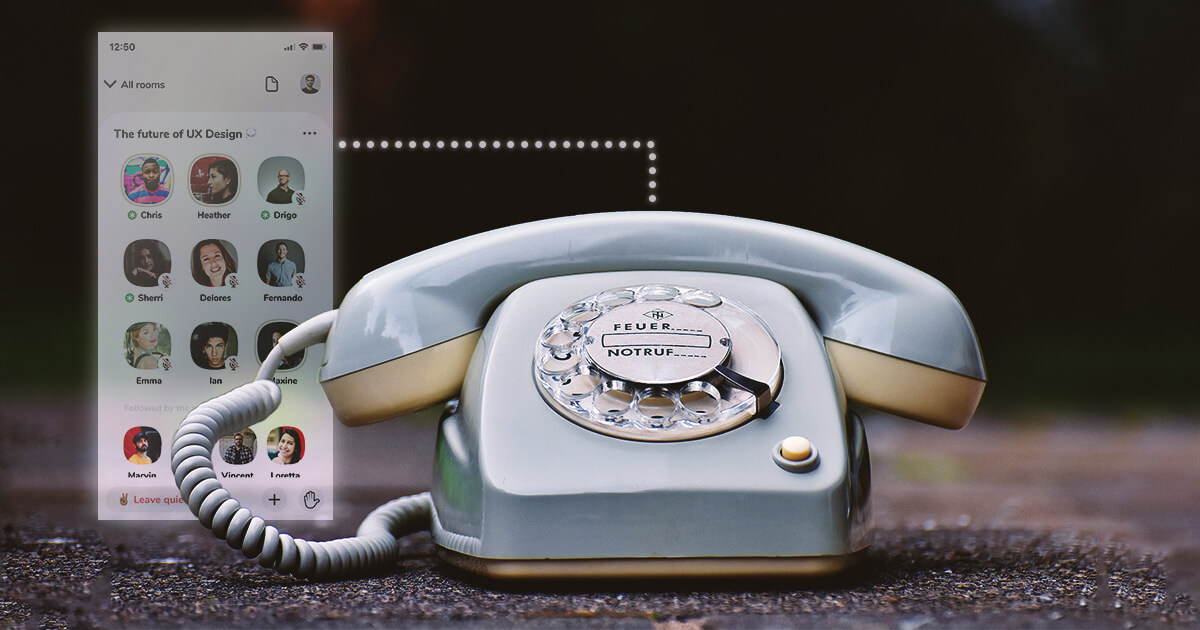 You’ve heard about it — Apple iOS is hosting a new darling, based on a pretty nostalgic concept. Back in the early days of telecommunications, ‘party lines’ were this thing where you could end up in a conversation with a large number of people communicating strictly in audio. That experience has gotten an upgrade, and it’s proving that despite our technology, we still love an experience that is real and personal.

Today we are going to explore a little Clubhouse’s timeline. We’ll start with its beginning, see what the celebrities have to say about it and where this nostalgic telecommunications remix might be heading in the future.

The founding company of Clubhouse

Clubhouse was launched in April of 2020 by the Alpha Exploration Company, specifically by cofounders Paul Davison and Rohan Seth. Powered by Agora, a Shanghai-based provider of software tools (though a company link has not been publically acknowledged, a Bloomberg report has found Agora references in the code), this invite-only software quickly gained popularity.

Starting with a base of around 1500, it now has over 2 million active weekly users and even received a 12 million dollar investment from Andreessen Horowitz after only two months of existence. It seemed obvious that they were on to something, so where did the concept actually emerge?

Cofounders Davisson and Seth had previously produced an app called ‘Talkshow,’ which allowed for public conversations that could be easily viewed and interacted with in public. While Talkshow did not take off, Clubhouse’s ‘party line’ style of dialogue with no videos or pics sent around proved to be a hit.

These two social apps have worked together or separately on several projects since 2011. At the time of this meeting, Rohan developed an app to help friends find each other easily in large cities while Davisson was working on an app he called ‘Highlight’ that helped encourage new friendships. It was a hit or miss, with the ‘miss’ being on the heavy side.

Fast-forward to 2019, and as they describe it, ‘against our better judgment and with the support of two very patient spouses, we decided to give social apps one last try.’ The goal with Clubhouse was to make something more personable so that you could feel like you’d shared a real interaction instead of the cold-feel of the standard text.

The simple ‘party line’ formula worked its magic and delivered exactly that. People really like talking to other people, and Clubhouse, rather than re-inventing the wheel, took advantage and reintroduced the old ‘party-line’ nostalgia.

The raise of Clubhouse

Launched in April of 2020, Clubhouse quickly gained momentum. After all, by making the app invite-only then you are bound to make everyone curious. What’s inside, and why can’t anyone check it out without an invitation? It’s only human nature to want what you are not allowed, but this can be a hit or miss, too, in marketing. Surprisingly! Clubhouse has over 2 million active weekly users.

With so many posting text-only Tweets or daily pics, perhaps it was merely the time for the audio to make a comeback. Whatever the case, Davisson and Seth managed to deliver Clubhouse at a perfect time. It is powerful, especially now, with the Coronavirus keeping people at home more often than not.

So, how fast has it grown? By January of 2021, Clubhouse had accrued over 180 investors. Here is a snippet of the statement that they delivered in January on their website, which you can view in its entirety at https://www.joinclubhouse.com/welcoming-more-voices:

“We now have over 180 investors in Clubhouse—large and small, spanning many different races, genders, and areas of expertise, and including many members of our early community. While we’ve never felt that fundraising itself is a milestone, we wanted to share how we plan to use these funds to make the product better each day and to help creators on Clubhouse thrive:

• Welcoming more amazing people: From the earliest days, we’ve wanted to build a Clubhouse for everyone. With this in mind, we are thrilled to begin work on our Android app soon and add more accessibility and localization features so that people worldwide can experience Clubhouse in a way that feels native to them.

• Keeping the servers up: We’ve grown faster than expected over the past few months, causing too many people to see red error messages when our servers are struggling. A large portion of the new funding round will go to technology and infrastructure to scale the Clubhouse experience for everyone. It’s always fast and performant, regardless of how many people are joining.

• Ensuring you get fast support: User safety has always been a top priority for us, and as we welcome more people, it will remain one. This means scaling up our Trust & Safety and Support teams as we grow, continuing to invest in advanced tools to detect and prevent abuse, and increasing the features and training resources available to moderators. We’ll also be aggressively growing our support team so that everyone’s clubs can get same-day approval. 🙂

• Improving ranking and discovery: As we’ve grown, the number of conversations happening on Clubhouse has skyrocketed, and it’s our job to help you find the right ones each time you open the app. With this latest round of funding, we’ll be investing heavily in discovery so that we can show you people, clubs, and rooms that are perfectly tailored to your interests—and help you discover new rooms you would never have thought to look for.

• Investing in creators: Creators are the lifeblood of Clubhouse, and we want to make sure that all of the amazing people who host conversations for others are getting recognized for their contributions. Over the next few months, we plan to launch our first tests to allow creators to get paid directly—through features like tipping, tickets, or subscriptions. We will also be using a portion of the new funding round to roll out a Creator Grant Program to support emerging Clubhouse creators.

So, have they delivered? Well, yes and no. Diversity is undoubtedly at Clubhouse. No worries with the servers. Celebrities have certainly been flocking to the app — but we are still waiting for a proper Android app.

While similar apps have sprung up and a security issue was also exploited that allowed users to access Clubhouse content with an open-source app, the ‘official’ Android app is still awaiting release. That said, this hasn’t stopped society’s elite from spending time in ‘The Clubhouse.’

Join the Clubhouse among the elite

Celebrities and billionaires have come to Clubhouse like moths to a flame. People like Drake, Ashton Kutcher, and Elon Musk are just a few of the famous users. Some other folks whom you might have heard of that spend time in the Clubhouse are:

Clubhouse has managed to provide a forum where everyone can interact on the same level. Yes, conversations are moderated, so you have to use a ‘hands-up’ request to ask a question or contribute in most cases, but without all the bells and whistles of pics, videos, and with the lack of recording, you’ve got something personal and unique.

It’s hard not to like Clubhouse because it’s something that we do every day. We meet up or go through our days talking to random assortments of people and let’s face it, it’s interesting.

It’s interesting enough that there are ‘copies’ already on Android.

Many companies have attempted to provide their own ‘clubhouse-type’ experience, the biggest of the bunch being Twitter with their ‘Spaces’ offering. They’ve tried building on the Clubhouse experience, adding emoticons and options to send in Tweets, but the thing is, we really don’t know where this will go.

Clubhouse is coming for Android, but we don’t have a release date, and we don’t have a lot of information about what they will be bringing to the table. After all, it’s an invite-only app in the first place, and this ‘You can’t come uninvited’ strategy makes it more attractive. People want to join enough that there is even a black market on invites, where you can pay 65 euros and hope that you get a legitimate chance to join.

So, while there are other apps out there, we have to say that we are very much looking forward to seeing what Clubhouse offers on Android. Will Android-access chase off the Celebs with their fancy Apple products? Who can say?!

All that we know now for sure is that Clubhouse has taken a classic concept and upgraded it and subsequently proven that deep-down, we still like to hear each other’s voices. If technology keeps becoming more warm and familiar, what kind of fantastic future will our kids or grandkids see?

Someone might be asking this very question now on Clubhouse, but for now, most of us aren’t invited, so we’ll just have to wait and talk about that another day!