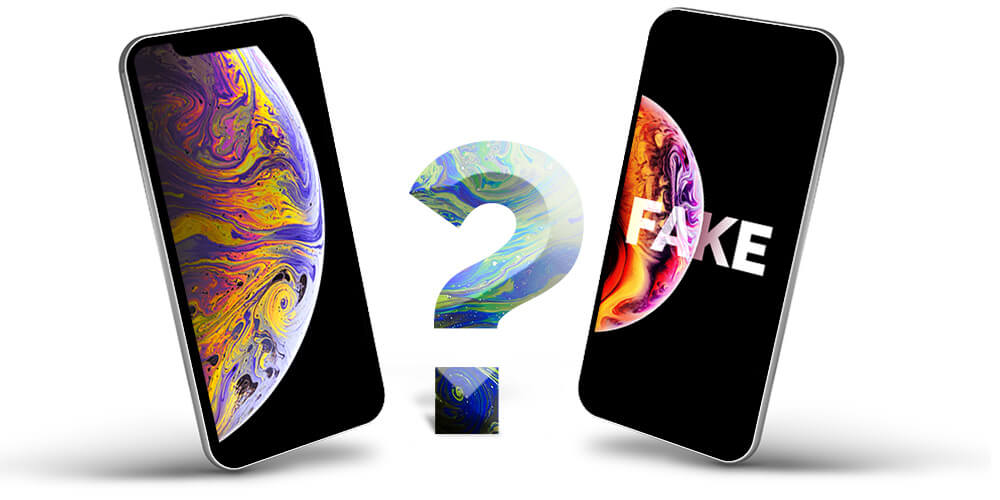 It’s not an overstatement: everybody wants an iPhone. Undoubtedly, nobody wants a fake iPhone. The real ones are sharp, have a superior warranty, and unmatched style. iPhones look fabulous and are great at whatever you want a smartphone to do, and this puts them in high demand. Unfortunately, this also makes them a ripe target for counterfeiters.

How can you make sure that the iPhone that a market vendor is trying to sell you is the real deal?

Today we will give you a crash-course on the things you need to check before making such a serious purchase. Remember, if an iPhone offer seems too good to be true, that’s because 99% of the time, it’s a fake. Let’s start with the physical indicators of potential fraud, and then we’ll slide smoothly into the red-flags to look for in the software.

Please note that 29 iterations of the iPhone are currently to date, so we’re trying to include only the most current info. We’ll use popular models such as the iPhone X for general examples in some cases to provide you with an approximation of Apple standards.

Thankfully Apple is quite dependable across the board with its iPhones, so this strategy is quite effective.

Physical checks to validate an iPhone is genuine.

Seeing is believing, but those fraudsters know how to put a shine on a phone they are trying to sell. Just because it looks new and fancy doesn’t mean that it is. Thankfully, Apple always goes that extra mile for its sleek signature style, giving you some ways to spot a fake iPhone right off the bat.

First off, you shouldn’t have any tape. If the box is taped-shut or there is cheap plastic wrap, then that is a warning sign right off the bat that this could be a fake iPhone. Apple always uses lovely plastic tabs that you can gently remove to get at the shiny Apple goodness inside.

Apple is also very particular about what they include inside. For instance, generic earbuds are an immediate ‘don’t buy this’ warning that you should heed. Here is what comes in an iPhone X box to give you a general idea of what to expect Apple to include:

Besides these, you’ll also have an Apple iPhone Setup guide, and inside that, you’ve usually got 2 Apple stickers. If you don’t see these things, then it’s quite possibly a fake iPhone or has been returned and improperly packaged (at the very least).

You can also get your current cellphone out and simply Google the box contents if you are not sure. If this makes the seller pushy, then you don’t even have to finish typing those keywords.

The charging port can be another dead giveaway that you’re holding a fake iPhone. You’ll see the black outline around the overall port, and this should look smoothly engraved. If it doesn’t feel that way to the touch or looks like it’s been drawn in or even shoddily engraved, then that’s definitely a fake iPhone.

However, that’s not all, as you also want to feel that outline directly around the port opening. If it’s plastic, then this is another fake iPhone sign. Finally, look at the tiny screws on both sides of the port. Apple uses ‘Pentax’ screws, easily identifiable by their design. If you see only a standard, 4-point/plus sign style screw, then alas… it’s a fake iPhone.

Apple screws will have 5 points, like a star, and that’s exactly what you should see on both sides of the charging port.

The IMEI/MODEL NUMBER on the back of the phone.

There is an IME number on the back of a new iPhone, and here is where you will need a piece of paper or your current phone to take some comparison notes. Write down the number, and we’ll carry this bit of information into our next set of fake iPhone checks.

Let’s see what the software can tell us about the validity of the iPhone you are inspecting.

Software checks to validate an iPhone is genuine.

Android software is easy to manipulate, and making a phone look like it’s got an Apple iOS on it is pretty easy to do – on the surface. But, the way it looks, and how it functions are going to be two different things.

Turn on the iPhone, and let’s start with the first check.

How does it greet you when you power it on?

Apple’s Welcome screen is going to be the Apple logo. It’s simple and, let’s face it, pretty distinctive. If you see the actual word ‘welcome,’ then you’ve got a fake iPhone on your hands. Apple has put a lot of craftsmanship and style into their brand, and they know it. That Apple is the only welcome screen that you should see when it loads.

Now, this TOO can be faked, so we’ve got more tests to help you be certain.

What happens when you select iTunes or Apple store?

Adding in the iTunes or Apple store icon is easy to do. Apps that can change the icons of other apps are out there, and they are a dime-a-dozen. This is a great thing when you want to, say, change your friend’s icons into grinning pictures of you as a joke, but counterfeiters take advantage of this easy icon-switching for a more nefarious purpose. They do it to make their fake iPhone look legit.

There is an easy solution to this. Try the icons.

If the Apple store or iTunes icons try to take you anywhere else, like the Google Play store, then you know that this is a fake iPhone.

How does it look when set to full brightness?

Apple is well-known for having vibrant color palettes. This is one of the big reasons everyone wants one, especially artists and photographers who rely on those high megapixel counts to ensure that the picture they are taking, viewing, or arranging will catch the eye!

To this effect, a fake iPhone will stand out noticeably if you turn it to the full brightness setting. You should be able to see everything clearly in the sunshine and, not only that, it should look sharp. If you have another iPhone or an Android with you, whip it out and set it to full brightness for comparison if you are not sure.

As you know, Apple colors stick out, but it’s easy with the excitement of a potential bargain to overlook that if the sun is out and you aren’t focused on checking that feature. So take a breath, put the brightness at its full setting, and see if it looks fishy to you. If it does, we can’t recommend buying it.

Open up the camera app.

Starting with Apple’s iPhone 8 models, iPhones began including 4k video capability. 4k video is the next step up from HD and is referred to as ‘Ultra High definition.’ If you have seen the fantastic image on an HD television, then you are looking at 1080p.

4k is four times better than that, which makes for easy testing!

Open the camera app and take a quick video at the 4k setting. You should be able to see the difference, and fake iPhones out there are often quickly identified with this test. They tend to have shoddy cameras or even 1080p at the most. You can test your current phone against it as well, especially if yours has 1080p. If the video doesn’t look much better than your own, this is likely a fake iPhone.

Another feature that started with iPhone 8 might be ignored by many but is enjoyed by a very happy few. We’re talking about facial recognition. This feature means that you can do things like lock and unlock your phone with your face if you like, and this is an excellent solution if you have siblings that are very good at guessing your password.

It’s also a function that fake iPhone models are BAD at.

So, simply set up the facial recognition feature with your face and try to unlock it with someone else’s. If it unlocks to just about any face you put in front of it, you’re probably looking at a fake iPhone.

See if Siri is home or a ‘neighbor’ is at her house.

Our final test to determine whether you’ve got a fake iPhone or are potentially holding the real-deal is a common-sense method that is easy to forget. Why not see if Siri is home?

Siri, Apple’s trademarked artificial intelligence helper, should be present and accounted for. If you try to load Siri and hear anything other than that distinctive voice we all know and love, then you’ve got your authenticity answer right there.

Some final words on Apple authenticity

Now that we’ve reviewed what you can look for when you are trying to spot a fake iPhone, we’d like to take the time to remind you that you can save a lot of trouble by going through a vendor that you trust. Fake iPhones are all over the place. People sell them everywhere, especially when you are traveling. For best results, go only through a vendor that you’ve dealt with before but if you absolutely MUST test a bargain, then be sure to use our authentication steps.

After that, enjoy your new, original iPhone!