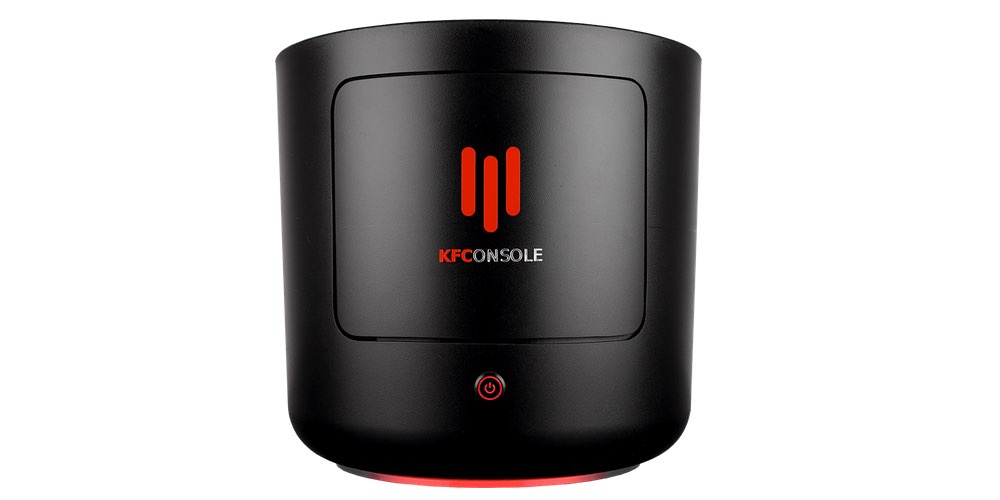 Just when we thought 2020 couldn’t surprise us anymore, here’s another piece of news that figuratively made our jaws drop. KFC, the popular fast-food chain known for its finger-lickin’ good chicken, has announced a gaming console (at least that’s what they call it). The latest console is called KFConsole. And good lord, we can’t get enough of the teasers.

The news broke out when a new Twitter handle of KFC called KFC Gaming (a verified account) tweeted an image of a new device that looked like a sophisticated Air Fryer because it got featured on a fast-food chain’s Twitter handle, duh.

But we couldn’t be more wrong. The KFConsole or mini PC is a real deal, and KFC is making it happen.

Yes, KFC has added its signature functionality into the console, i.e., the ability to heat chicken wings. Nope, we are not kidding. KFConsole comes with the feature of heating chicken wings.

Just check out the teaser below:

The gaming console or a mini PC by KFC looks like a black mini bucket with a special compartment for gamers to heat chicken wings while indulging in online battles. This year couldn’t have been quirkier than this. Imagine a gamer engrossed in the gameplay while heating the chicken wing on his console.

KFConsole is as Real as Real Gets

KFConsole will be manufactured by Cooler Master – a known brand in the gaming community. The involvement of Cooler Master gives us the much-needed approval that KFConsole is the real deal. To cement our thoughts, Cooler Master has also created a dedicated website for the upcoming console. You can check it out here.

The website or the landing page for KFConsole states that the device is VR-ready and supports 240 Hz on 4K displays, which will most likely ship with an HDMI 2.0 port. The specs also mention Ray Tracing, a must-have for any of the latest gaming consoles.

Cooler Master has integrated a mini heater for fried chicken with a small drawer that acts as an outlet for passing hot air. The console will keep your hot wings perfectly hot and crispy.

The KFConsole features Intel’s Compute Element PC paired with NVIDIA GPU. The console’s landing page also mentions Asus as the graphics partner and the GeForce RTX card, which means we may get an RTX 2070 or above, maybe even an RTX 2080.

The page also lists 2TB of NVME SSD capability on the console, ensuring support for a slew of current top games.

KFC is using all of its social media intellect to promote KFConsole. Their social handles are not leaving any rival to get by without a shot. Some of the jibes are funny. They even had some smart retorts for the Twitter users who were questioning the merit of KFConsole to be called a console.

Check out one of the tweets below:

Yeah, we know that it all looks too real, and some of us may even want to buy the KFConsole as soon as it goes official. As per various Twitter accounts, KFC is hyping the product for now and might later bring out the device.

We hope this does not stay limited to just talks, and a fancy landing page or KFC will be up for some brutal tweets from the entire gaming community.