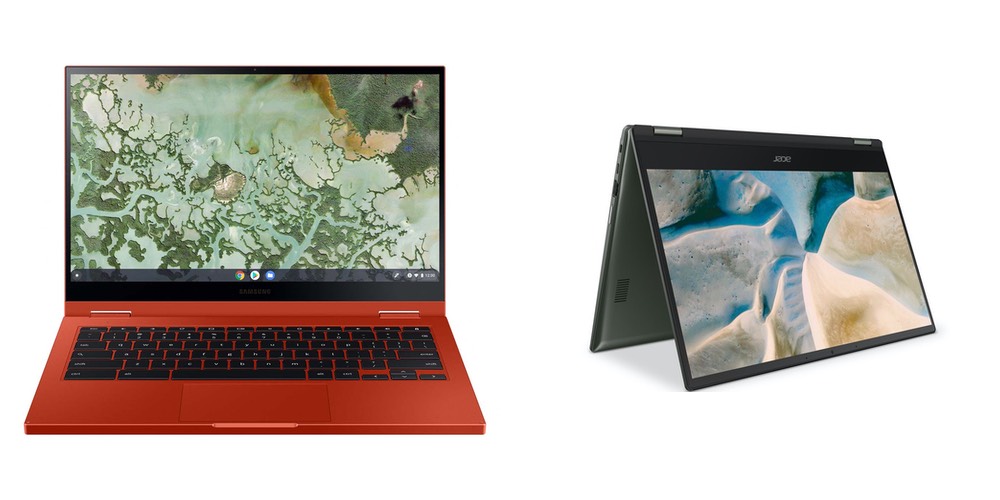 The CES 2021 is yet to kickstart officially on January 11, but that did not stop Samsung and Acer to paint the tech town red with their big new Chromebook announcements early. Samsung has launched the best looking Chromebook with the Galaxy Chromebook 2. On the other hand, Acer has launched Chromebook Spin 514 – the first Chromebook powered by AMD mobile CPUs and GPUs. Let’s dig into the features and specs of these two new Chromebooks.

All About The Acer Chromebook Spin 514

Acer has launched yet another Chromebook to its existing series. The latest Chromebook Spin 514 is the first to come powered by AMD’s mobile processors and graphics chips. Acer aims its latest Chromebook at businesses with security features that allow admin to install apps, handle updates, and more. The Chromebook offers management-level access to businesses.

Coming to the specs, the Chromebook Spin 514 features a 14-inch full-HD touchscreen display with 360 degrees rotation functionality and Corning Gorilla Glass protection. The rotation feature allows the Chromebook to be used as a laptop and a tablet.

Concerning durability, the Chromebook has got a MIL-STD-810H rating to get through a fall from 48 inches of height. It is made from anodized and sandblasted aluminum. The Chromebook weighs 3.42 pounds and is 17.35mm thick.

The Chromebook Spin 514 has 16GB of DDR4 DRAM and up to 256GB of SSD storage. It has got 2 USB ports, 2 USB Type-C ports, and a microSD card slot. Select models also feature a built-in HDMI port for connecting the Chromebook to a monitor or a TV. The Chromebook has got two speakers and two microphones. The battery promises up to 10 hours of backup on a single charge.

The Acer Chromebook Spin 514 comes with a starting price tag of $479 and will hit the sale shelves in February 2021 in the US. The European pricing for the Chromebook would be €529. The Enterprise model hits the market in March, with a price tag of $749.99 in the US and €799 in Europe.

Samsung’s Galaxy Chromebook 2 is a work of art. No, seriously! We are in love with the color and design of the product. It is ultra-slim and sleek, which oozes panache. And that’s not all; this also happens to be the first Chromebook with a QLED-based display powered by quantum dot panels.

Although the display is QLED, the resolution is capped at full-HD, unlike the 4K resolution on the series’s previous models. Also, the display is a touchscreen with support for S-Pen Stylus. The stylus is not included in the packaging, though; you will have to buy it separately.

The 13.3-inch display on the Chromebook produces vivid and bright colors making it a complete entertainment machine with Google’s Chrome OS experience at heart. The typing is touted to be breezy on this latest Chromebook with neatly backlit keys like MacBooks. The Galaxy Chromebook 2 is available in Red and Gray color variants.

Samsung boasts the Galaxy Chromebook 2 has premium sound, compelling performance, and more convenient typing — all stacked in an ultra-slim design. The outer layer of the chassis has got aluminum, while the inner layer makes do with plastic.

The new design considerably brings down the weight of this Chromebook in comparison to the previous models. The Galaxy Chromebook 2 weighs just 2.71 lbs and just a little more than a half-inch thick.

The Chromebook’s connectivity options include Gigabit Wi-Fi 6, 2x USB-C ports, AKG stereo speakers, HD webcam, and more. Samsung has also integrated a dedicated security chip for enhanced protection on the Chromebook with automatic background updates that safeguard the machine from viruses and malware.

Lastly, the Galaxy Chromebook 2 costs $549 for the Celeron model and $699 for the Core i3 variant. At such a price tag, the Chromebook rivals Acer’s Flip series. The Chromebook 2 by Samsung is expected to hit the sale shelves this year; the company is yet to reveal the exact release schedule.