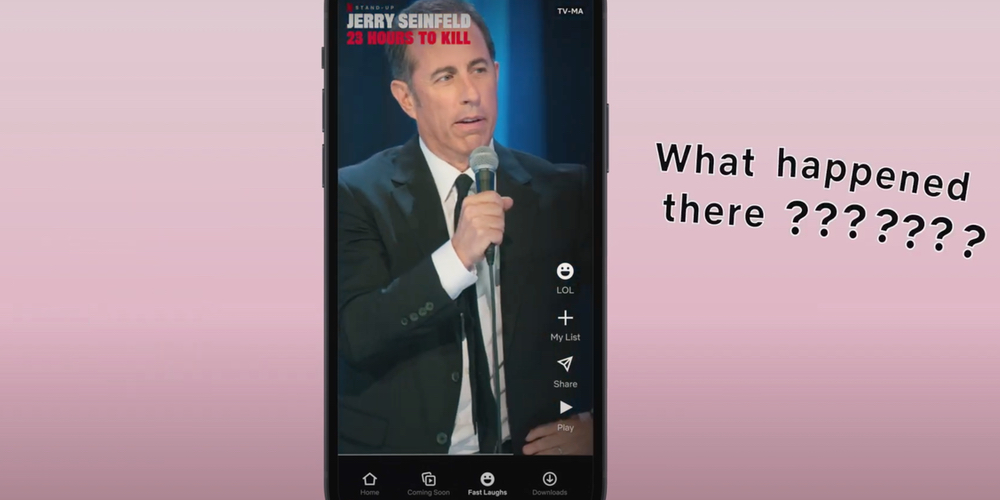 TikTok’s success pushed a lot of apps in trying something similar. Facebook-owned Instagram did with ‘Reels’ and now one of the leading streaming services, Netflix, is bringing a TikTok inspired short video feature called ‘Fast Laughs’ for mobile users.

We can call it a bid to lure more teen audiences into using the streaming service. It is a continuous feed featuring short comedy videos that users can browse and click to view the complete show or movie. In other words, it’s a preview of sorts featuring the best parts of a show or movie to attract more viewers.

Look For ‘Fast Laughs’ Tab On Your iPhone

When you open Netflix on your iPhone, you will find a dedicated tab called ‘Fast Laughs’ (currently limited to iPhone). When you tap on it, you’ll be greeted with short comedy clips taken from the catalog, including Netflix specials (like Kevin Hart), movies, and shows. Like TikTok, you can browse through videos on Fast Laughs and share them with your friends on other social networks, including Instagram and Twitter.

Netflix is honest about its end goal here, though; they want to garner more views for their comedy content. And we think it’s a fair way to give a sneak peek of some of the best moments of the comedy shows/movies. If users like what they saw in a short video format, they may want to watch the entire show or movie.

Check out the latest feature in action below:

With newer content making its way to Netflix, it becomes hard for viewers to keep track of some good comedy shows and movies. With a feature like this, viewers would be able to get a better look at the catalog.

Currently, Fast Laughs is limited to iPhone users only and that too in select countries. However, Netflix states that it will soon be testing the feature on Android too and add more regions to the list.

Are you looking forward to testing the Fast Laughs feature on Netflix? Share your thoughts in the comments.