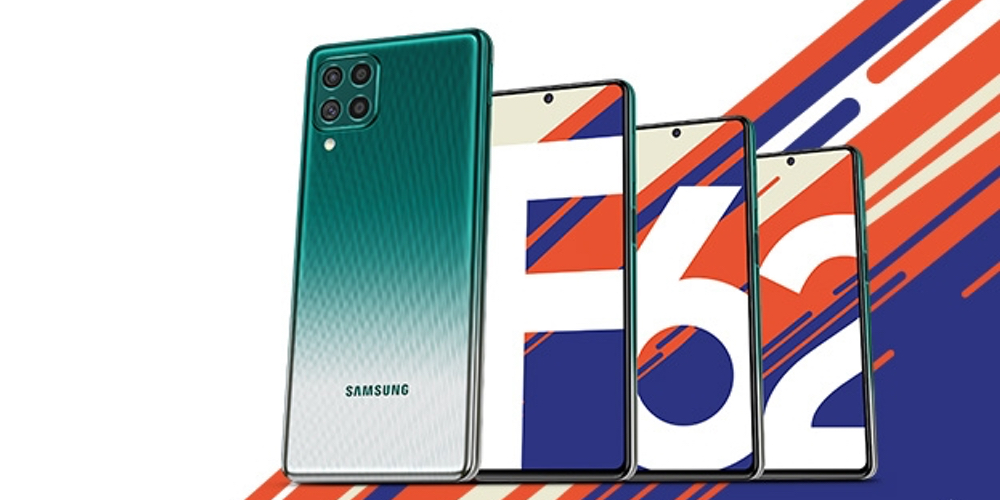 Samsung launched a new mid-range phone named Galaxy F62 in India with impressive specs. The phone is the latest to join the F-series. It is priced at $330 and will be available in two variants – 6GB RAM + 128GB storage and 8GB RAM + 128GB model. The smartphone is available in Laser Blue, Laser Green, and Laser Grey color variants.

The Galaxy F62 comes with a 6.7-inch Infinity-O AMOLED display with FHD+ resolution featuring a hole-punch camera cutout in the middle that houses the 32MP front camera. A massive 7,000mAh battery backs the Galaxy F62 with the support of 25W fast charging.

Unlike the last phone in the F-series, the Galaxy F62 packs a solid punch with Samsung’s 7nm Exynos 9825 SoC, which was part of the flagship Note 10 series. The company has clubbed the powerful chipset with 8GB of RAM and 128GB of internal storage that can expand further via microSD card.

Concerning optics, the rear side of the Galaxy F62 rocks a quad-camera setup featuring a 64MP primary camera, a 12MP ultra-wide sensor, a 5MP macro lens, and a 5MP depth sensor. On the software front, the Galaxy F62 ships with Android 11-based One UI 3.1. There is a side-mounted fingerprint sensor onboard. The phone’s design is also impressive as we get a vivid metallic gradient pattern at the back, giving it a premium look.

Given the device’s specs and features, it looks like Samsung is rivaling it against the likes of OnePlus Nord. For now, it has not been revealed whether Samsung would be bringing the phone to international markets. If it does, then it would be interesting to see if buyers go for a Samsung mid-range instead of available options from brands like Motorola, Xiaomi, and OnePlus.