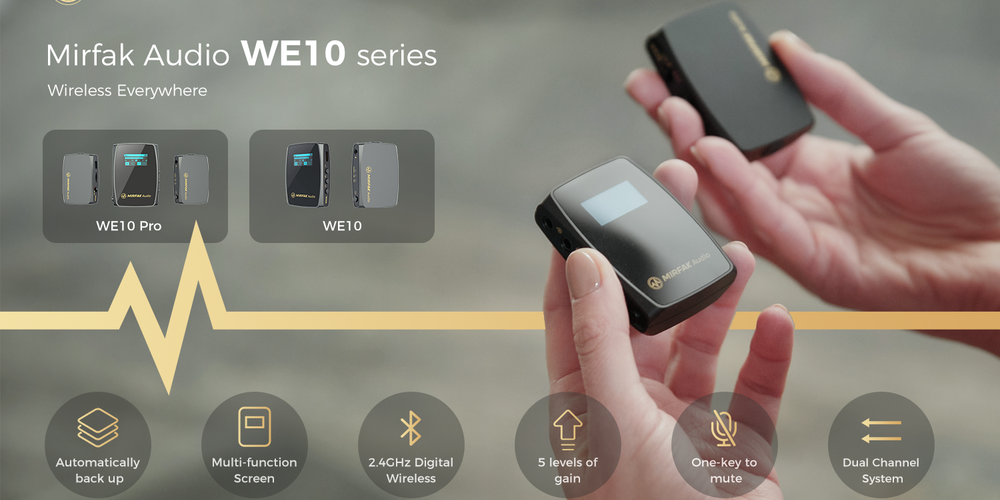 Gudsen-backed Mirfak Audio is a microphone solution provider with an arsenal of premium audio products pioneered by wireless microphones. Mirfak has unveiled a new set of wireless microphones: WE10 and WE10 Pro, aimed at bringing superior audio support to videos and other media formats.

The new set of microphones by Mirfak come in two variants WE10 and WE10 Pro. The primary difference between the two is that the WE10 comes with a single transmitter, while the WE10 Pro has got one receiver and two transmitters to suit different requirements.

Not Your Token Microphones

With the WE10 series, Mirfak is looking to enhance the productivity of microphones. The microphones from this new series are not your token microphones with limited abilities; these two automatically back up your audio on the go. Users need to attach an SD card to equip them with recording capabilities.

The Mirfak WE10 series comes wrapped in a small and portable body paired with a multi-functional touchscreen. The Mirfak WE10 System pitches itself as a compact wireless microphone system best suited for content production. It can come in handy during different content-making mediums such as filmmaking, theatres, Vlogging, and more. The touchscreen on this microphone offers visual functionality and better audio monitoring for enhanced results.

Under the hood, the Mirfak WE10 series is powered by a 2.4GHZ digital wireless. It is a leap forward from an analog system as it blocks interference from TV and radio waves. The system automatically switches transmission frequency to decrease noise and audio drops at a line-of-sight distance of up to 30m.

Mirfak WE10 series is an advanced set of microphones supporting high broadcast-quality sound. The omnidirectional high-fidelity microphone on the WE10 series supports vocal curve correction and can pick 360-degree audio with utmost sound clarity. It also has a 3.5mm headphone jack for an external microphone that gives users an edge to use two input modes for different requirements.

The Mirfak WE10 is priced at $169, while the WE10 Pro costs $249. Both the microphones are up for ordering from the Mirfak store.

Mirfak audio products are quite popular in the Vlogging community as they make for an excellent companion for audio recording. We will soon be reviewing one of the products from Mirfak. Stay tuned with us!