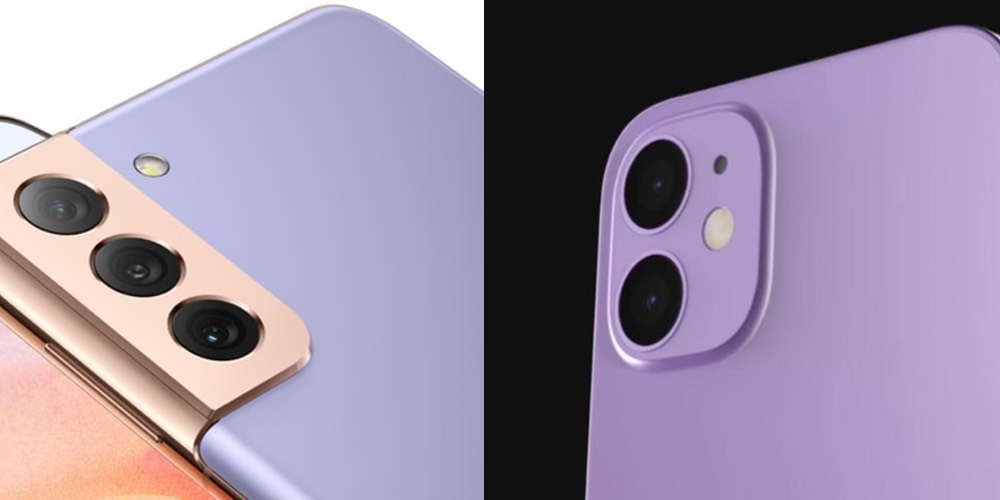 When it comes to smartphones, one couldn’t get enough of the two prominent brands – Samsung and Apple. Representing iOS and Android, both the brands rule the domain and are often the first ones to set trends. Of course, the Android segment has had new entrants like OnePlus, Xiaomi, and others, but somehow Samsung still holds a unique place for flagship smartphones.

Talking about current trends, both Samsung and Apple have new smartphones on the market – Samsung Galaxy S21 and Apple iPhone 12.

If you have been thinking about getting a new flagship phone and are torn between the Galaxy S21 and the iPhone 12, we are here to rule out your doubts and present a clear picture to make a sound decision based on a comparison.

We pit the Galaxy S21 against the iPhone 12 and gauge which one is a better deal in terms of specs, features, pricing, and availability. Our detailed comparison will answer the question – Should I get the iPhone 12 or Samsung s21?

The Apple iPhone 12 launched with super-fast 5G connectivity and a new form factor–kickstarting a “new era” for the iPhone, as claimed by the CEO Tim Cook. On the other hand, for the Galaxy S21, Samsung also debuted the latest phone with 5G connectivity, many new features, and a new form-factor with better camera placement and setup.

Apple iPhone 12 and Samsung Galaxy S21 make for a worthy competition because they both rock fantastic displays with the latest technologies and quality.

Well, Apple trumped Samsung on one superior aspect that it earlier used to enjoy on its flagships, i.e., OLED screen. Apple launched all the phones in the iPhone 12 lineup with OLED screens instead of LCD, which means users can get a $699 priced iPhone with an OLED screen. This brings the competition closer from the price point, too, for both the brands.

However, there remains one aspect wherein Samsung keeps an upper hand, i.e., the refresh rate. The latest Galaxy S21 enjoys a superior 120Hz adaptive refresh rate that allows it to deliver a seamless scrolling experience to users along with the best display of gaming graphics. The adaptive refresh rate technology also manages to adjust itself dynamically depending on the user’s on-screen activity, and it also helps in saving battery power.

Apple iPhone 12 remains limited to just a 60Hz refresh rate, which can’t quite match up to what one gets on the S21.

Concerning design, Apple did not bring any drastic change over the iPhone 11 lineup. The company made a tiny change in the form of flat edges instead of curved ones, making the iPhone 12 look more similar to the iPhone 5 lineup. Kind of a throwback there by Apple. Another design change that usually goes unnoticed is the Ceramic Shield display that offers 4x more protection than the previous models.

The Samsung Galaxy S21, on the other hand, brought some significant changes to the Galaxy S20 lineup. The new series comes with a Contour Cut camera setup on the rear that blends the cameras into the phone’s chassis. It looks pretty great on the rear.

The iPhone 12 has a 12MP+12MP dual rear camera setup, wherein the formed has an f/1.6 aperture, Optical Image Stabilisation (OIS), and the latter enjoys ultra-wide angle with an f/2.4 aperture. The camera has features like up to 2x of optical zoom, up to 5x digital zoom, Night Mode, Deep Fusion, Smart HDR 3, and more. On the front, there is a 12MP selfie camera with an f/2.2 aperture.

On the contrary, the Samsung Galaxy S21 features a 12MP+64MP+12MP triple camera setup. The 64MP telephoto lens has ƒ/2.0 aperture, and OIS support alongside phase-detection autofocus.

The 12MP wide-angle lens has an aperture of ƒ/1.8 with OIS and dual-pixel AF. And the 12MP ultra-wide lens comes with ƒ/2.2 aperture and 12–degree Field of View (FoV). The entire setup also supports features like 30x ‘Space Zoom’ and 3x optical/digital zoom. There is a 10MP selfie camera on the front with f/2.2 aperture and dual-pixel autofocus.

As one could quickly gauge, Samsung offers a more substantial camera setup on its flagship than Apple. Of course, Apple’s A14 Bionic chip makes up for many photography features enabling the iPhone 12 to produce excellent shots. But Samsung covers both software and hardware for cameras on its flagship.

Coming to performance, we take a look at hardware and software setup on both the flagships. This segment is where Apple truly takes over Samsung with its top-of-the-crop A14 Bionic chipset that has always faired better than any Snapdragon or Exynos SoC when tested.

The A14 Bionic chipset inside the iPhone 12 makes it the best performing smartphone on the market. And the benchmark of performance is so high that it will take others quite some time to reach around it.

The Samsung Galaxy S21 settles for the latest and most powerful chipset yet for an Android phone, Qualcomm’s Snapdragon 888. While it retains the highest performance for any Android phone, Qualcomm also promises some other features on its flagship SoC, such as an enhanced image signal processor, AI engine, and more. But no matter how powerful the chipset might be, it just can’t win over the A14 Bionic by Apple.

On the software level, the iPhone runs iOS 14 while the Galaxy S21 runs Android 11 with a promise of up to 2 years of future upgrades.

The battery segment is where Samsung shines. Apple’s iPhone 12 lags in terms of battery backup and that’s also because it supports 5G connectivity that would arguably suck on more power than previous connectivity standards. The iPhone 12 does not shine as much in this department because it is the first 5G phone by the company, and Apple still has a long way to improve the battery following the connectivity power demands. We may see battery improvement on the next iPhone lineup.

On the other hand, the Galaxy S21 has a 4,000mAh battery that’s supposed to perform even better with Snapdragon 888 chipset at the helm. The chipset manages to conserve power even when on 5G. It comes integrated with a 5G modem that improves the battery life and delivers more backup than the iPhone 12.

Both the phones ship without a charger, and that’s one trend that we blame on Apple and equally despise Samsung for jumping on the bandwagon. We find it unjust not to get a charger when buying a new phone at the user end. But it is what it is, and we will have to make do with this new trend where buying a charger is the only option.

Other connectivity details include Qi wireless charging up to 7.5W on the iPhone 12. The phone can charge up to 50% in just 30 minutes with an adapter of 20W or higher. While the Galaxy S21 also gets fast charging on wireless and wired.

Coming to the overall outlook of both iPhone 12 and Galaxy S21, we think that both the phones give each other a neck-to-neck competition. The iPhone 12 takes the cake in the performance department, while the Galaxy S21 offers more enhanced battery support. In other segments like display, cameras, software, and more, both phones remain tightly in competition.

In the end, we would like to say that between Samsung and Apple, it also becomes a matter of choice between the iOS and Android ecosystem. So, users should choose wisely and per their comfort level with either of the software setups.